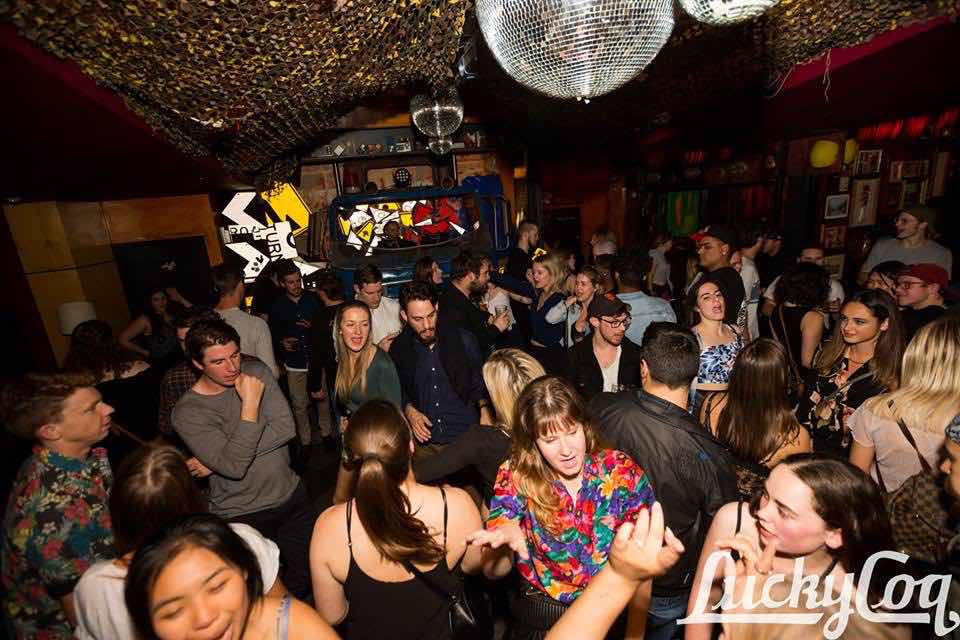 So it’s absolutely packed and going off to a healthy mashed-up dose of punk, rock, pop, hiphop, rnb, bass and assorted party music (as I do). The current standard way to request at a place like Lucky Coq (due to me playing in a truck —fer real) is to hold up your phone whilst I ignore said phone.

On this particular occasion (this past Sat night), a phone is thrust into my vicinity and waved around viciously just over the mixer. It’s obvious that this punter is not very accepting of my ignore tactic, so I play the game and look at the phone in a polite “you gotta be fucking kidding me” manner.

I have to hand it to this particular punter, as she has written a full page on her phone, like, an entire page of text. And just to get me on side right away, quite clearly, it says, “You’re a sham! We’ve been here watching you for almost 2 hours and you haven’t played one relevant song yet. Play something modern like Chris Brown.” I may have added a few subtle points, but it was pretty much this. Mind you, the place was packed and going off — everyone was having fun. Also, yes, she used the word “sham”.

So I’m going to break this down for posterity sake:

3 songs later and the night’s over (I closed with Guns of Brixton as security requested that and it’s a great track — I love The Clash). Of course, this means it’s now time for the girl with the phone to come tell me how shit I was and how my playlist is about 10-years too old. It’s actually waaaaaaaay older than that, so ha!

This leads to a verbal tirade about how I’d never cut it DJ’ing in the USA as they’re more “forward thinking” and they play “relevant music”. I literally laughed at her as I had no actual comeback to that. “Chris Brown” and “forward thinking” are not two concepts I equate as one, but, hey, I am waaaay behind in the times. So I just laughed, which made her even angrier. This is when security began to escort everyone out and she continued to tell me how shit I was and how she’d never come back. She literally was yelling at me from across the floor.

I thanked her for her comments (actually, I I think I yelled “God bless America and make America great again!”) But I digress....

Anyways, her message got me to thinking. What is “relevant music” these days?

I mean, I’ve loved music since I was old enough to play pots and pans along to Sesame Street and I was in bands since I was 14, playing in bars and clubs since I was 16 and have DJ’ed now for 19 years.

I like to keep my fingers on the pulse as much as I can and buy a lot of new music, but find that the new music I like the most isn’t the music club kids are into (at least not at the majority of places I play). For the sake of this post, I won’t go into all the new music I’m into as it’s quite varied and anyone that knows me knows that I love ALL music and have not a chin stroking bone in my body. But in terms of club stuff I play that borders on hiphop, dancehall and RNB, I’m into Leikeli47, Fab Boyz, Mike Darole, SZA and Vince Staples and I’ve noticed these acts don’t get the same crowd reaction as classic hiphop and RNB like 50 Cent, Biggie, Snoop, Mary J, Missy, etc.

In fact, playing one or more of these tracks often kills the dance floor during peak time sets (not bad for opening sets, but you gotta play the jams to hold a dance floor at more commercial venues — I’m not afraid to admit it). So I gotta play the new stuff sparingly with the old stuff if I want to seriously rock (and pack out a dance floor — in my experience). Nothing new here, as any DJ who plays similar venues to me can attest to.

So therefore I play a lot of mash-up to keep it interesting for me. If yer wondering what “mash-up” is (OB styles), at Lucky Coq (I only do the closing sets there), I’d say it’s 70-30 in terms of rock/punk rock/nu metal/pop getting 70% play and hiphop/rnb getting the remainder. At other venues, I’d mash it up with house, drum’n’bass, reggae, bass, disco, etc but this was not one of those vibes or venues on this particular occasion. The packed room going off was validation that I was actually doing something right, but I was cheesing it up big time. Having fun! I make no qualms about this...I get paid to rock the house.

So I completely understood where she was coming from about the lack of relevance in my set, albeit she was rude as hell about it. Hence, me being a dickhead back to her.

But here’s my take on why I play club sets the way I do...

With the iPod generation now being regular club attendees, I’ve noticed over the past 10 years that kids like quick mixes, many styles of music and lots of anthems. Older heads (like myself) are happy to kick back, hear songs out and go on that journey (I fucking hate the word “journey” when it comes to DJ’ing as it sounds so wanky, but I love saying it for the sake of Big Rich — he loves Steve Perry). It’s why I’m mellower with the Bar gigs.

So mixing in the commercial type clubs I play is way different to mixing in the bars I play (where you can play the underground stuff). I guess it’s always been that way, but the lines of demarcation have never been so contrasting to me as they are now. Luckily, I have my feet in both camps...but for how much longer, I don’t know. Maybe I’m not relevant at all and kicking it way past my bed time.

That’s the thing with ‘relevance’.

I’m sure Axl Rose thought he was still relevant when he played to half-empty theaters when he toured with that horrible version of GNR. Is my time coming? Or did my time already come and I didn’t see it? I guess 20 years in this DJ game is a good run and I’ll keep doing it til nobody books me anymore, but there are fewer and fewer of my contemporaries still playing. I’m 44 this year, is that too old?

So I guess I’ll end with what I think is relevant music:

Relevant music to me is anything that sparks an emotion. If it makes you happy, it’s relevant because it’s brightened your outlook on life (for even the time the song is on). If it makes you sad (due to an attached memory), then it obviously has some form of relevance to it that will hopefully be cathartic in some form.

Why put a year or time frame on what makes music relevant or not? Timeless jams like ‘Don’t Stop Believin’ (Big Rich, I love you), ‘Juicy’ or ‘Funk Phenomenon’ will always rock a dance floor (well, ones I play, at least), so why pay a person out for sharing what they love about music?

Posted by OBLIVEUS at 8:57 AM No comments:
Newer Posts Older Posts Home
Subscribe to: Posts (Atom)